WORK ON THE TOWER COMPLETE

After a frantic few months, the south-east pinnacle on the tower of St. Michael and All Angels, Great Badminton has been made safe and been rebuilt.

In November 2017, the pinnacle was found to be dangerously leaning. A structural engineer confirmed our fears. The next month and a half was spent gathering together quotations for the scaffolding and stoneworks. Due to the position of the pinnacle, a very expensive scaffolding tower had to be designed. A main reason for the cost was that the scaffolding had to be able to support the weight of the pinnacle's stones and urn, along with the stonemasons and their equipment, without placing any load on the tower or roof of the church.

The scaffolding took over two weeks to erect, and was handed over to us on 13th February 2018. Work to dismantle the pinnacle began later that week. The stonemasons found that the lightest of pushes would have seen the pinnacle topple into the outer porch, or onto the south-western corner of the nave's roof!

The Gloucester Diocesan Advisory Committee (DAC), were extremely helpful at all stages of approving our plans for rebuilding the pinnacle. Their speed enabled us to complete the works within the very limited twelve week window we had available to us for the hire of the scaffolding tower, without incurring £1,000 a week additional hire costs. We thank the DAC for their support.

Work on actually rebuilding the pinnacle began in the second week of April, shortly after Easter. The replacement stone section, which replaces the three damages old stones, is far sturdier than the originals. This pinnacle, it must be remembered, acts also as a chimney flue for the fireplace in the Tribune at the eastern end of the church. The Tribune is only accessible from Badminton House and was only used by The Duke of Beaufort and his family, in days past.

Lowering The Urn To Its Pinnacle Base

On Thursday, 12th April, work started to lower the urn finial onto the pinnacle base. We already knew that the dowels in the corners of the base of the urn were going to be a potential problem, and that the base of the urn was going to be narrow. However, when it was being lowered, we discovered that the lip of the base was so thin and badly worn that it was not possible to fix it to the pinnacle base with new dowels and make it safe. The only viable option was to cut off the unusable section of stone and to replace the base with a small new section of stone, carved to match the original, which would allow it to be securely fixed and doweled to the pinnacle.

This work was done on Thursday afternoon and Friday morning, allowing Phidias to complete their work on the south-east pinnacle on Friday afternoon.

All high levels of the tower have been re-pointed, where necessary, and repairs have been made to the damaged balusters and coping stones. With luck, the tower should now be in a safe and sound condition, meaning no major works will be needed for another century or so!

Our thanks go to the team at Phidias Neo Classical for their professional and exacting work. We now await the removal of some of the scaffolding to allow Phidias to move on to the gable end bedding stone problem.... 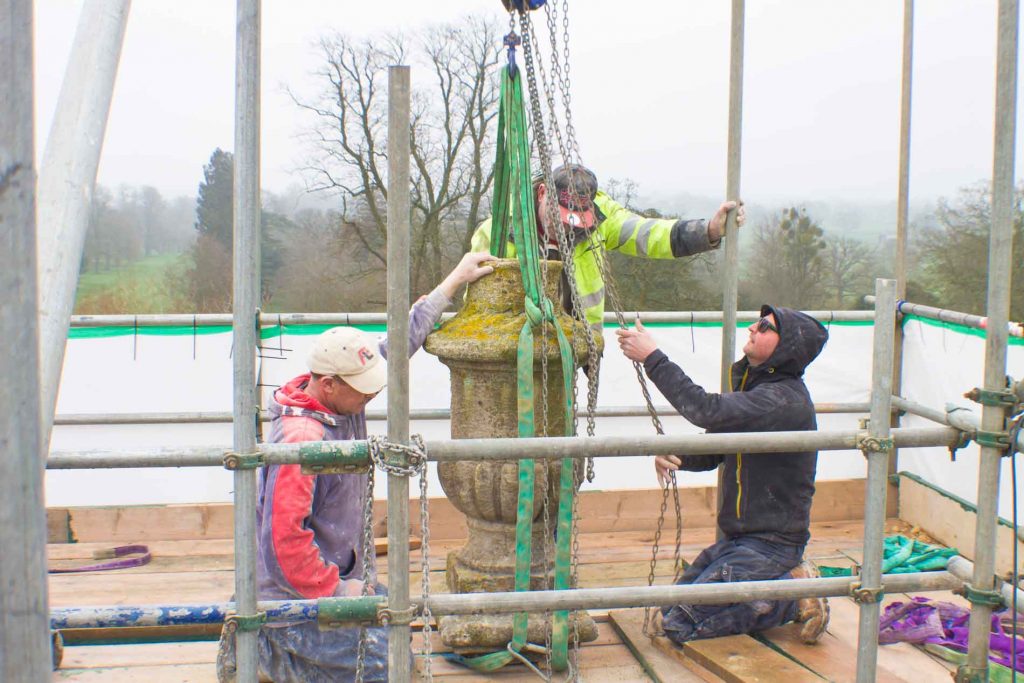